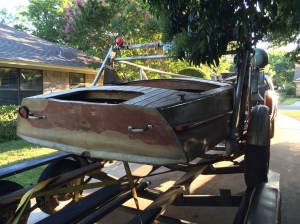 My 1948 Speed Liner 14′ Trophy Deluxe Racing Runabout arrived from Great Falls, Montana one day last week.  I bought the boat on eBay from the son of the man who was the original owner of the boat, who had bought it brand new.  As you can probably imagine, Montana has a relatively short boating season, plus the man was a farmer and, therefore, had little time for boating.  Consequently, in its entire 67-year life the boat had been in the water less than ten times.  So as to eliminate the bothersome effort of having to swell the boat every year, the owner had fiberglassed the mahogany planked hull sides and the plywood bottom.  As you can see from the pictures, the old fiberglass has pulled away from the wood and needs to be removed. 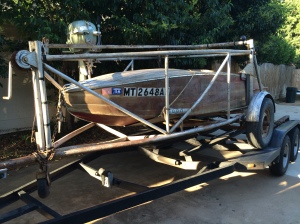 I contracted with a transport company on uShip.com to deliver the boat to me in Texas.  Since the trailer the boat was on was not roadworthy, at least for a trip from Montana to Texas, I specified that it should be loaded onto a flatbed trailer for transport.  When the boat arrived, it was still sitting on its own trailer; however, the boat and its trailer were sitting on top of yet another boat trailer.  Its wheels were riding on the steel steps in front of the wheel wells of the other trailer.  How the driver got the boat on there I have no idea.  I also had no idea how he was going to get it off.  However, ingenuity and perseverance prevailed. 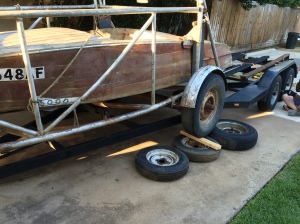 We ended up stacking some old boat trailer wheels and tires I happened to have in front of his trailer’s wheels so as to create a set of stairs, if you will, on which the boat would travel down to ground level.  Then, after dismantling about half the parts from his trailer, the driver hooked my boat’s trailer to the hitch on his truck and pulled it down off his trailer and to the ground completely undamaged.  Yay!  Miracles do happen. 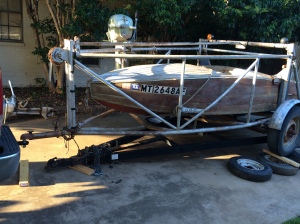