Today Patrice and I took my 1960 Glasspar G-3 ski boat out for its maiden voyage after getting the motor out of the shop.  The boat is powered by a 65-horse 1965 Mercury Merc 650, which is actually a lot of motor for such a little boat.  I bought this boat on eBay from a guy in Indiana back in April 2014, and have had it in the water only once before today.  That time it started fine and went forward and backward, but had no acceleration at all.  So, after that trip I hauled the whole rig down to Mark Gunter at Gunter Marine Sales and had him find and fix the problems.  He determined that the throttle and shift cables were too long and that the throttle cable was actually frozen.  He installed new cables, serviced the motor, and replaced the impeller.  It runs like a champ now. 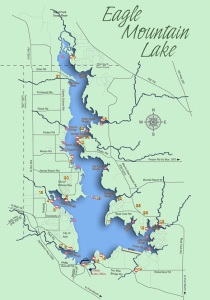 For the past few years, Texas has endured a severe drought, resulting in the water levels being so low that most area lakes were closed to boating.  However, this spring we had so much rain that now most of the lakes in the area are closed until after Labor Day because they have too much water in them!  Oh, the irony.  Fortunately, Eagle Mountain Lake was open, so we went there for our day of boating.  Eagle Mountain Lake is a reservoir on the northwest edge of Fort Worth, formed by the damming the West Fork of the Trinity River.  It covers an area of 13.58 square miles and has a surface level of 2,129 feet.  It’s a big lake and it was hot today – 98 degrees, and, as is always the case in Texas, the wind was up.  Consequently, the water was pretty rough.  So, under these conditions, when you’re riding in a low-profile V-hull fiberglass ski boat that is only 13′ 7″ long, you can take quite a beating.  In fact, we should have made wearing a kidney belt mandatory.  Patrice and I could take only about an hour of this body punching before we decided to call it a day.

The boat ran well.  It cavitated a bit, but I think I had the motor tilted up too much, which is easy enough to rectify.  Next time I think we’ll try Lake Worth, which is just down the road from Eagle Mountain Lake.  It’s smaller and the water looked much smoother when we drove by it on the way home.

And a good time was had by all!

One thought on “Kidney Belt Mandatory”