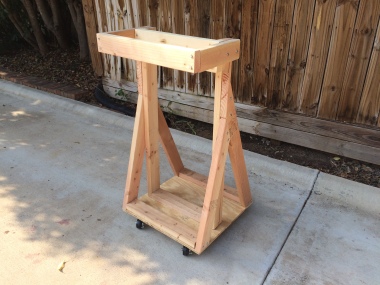 My 1979 Johnson Stinger 75 outboard motor arrived a couple weeks ago, and has been sitting in a crate on my driveway ever since.  Finally, having tired of this huge, 34″x61″x46″ wooden crate taking up one whole end of the driveway I decided to dig the motor out of the crate.  Before I could do that though, I needed to build a stand for the motor on which to store it.  After a half-dozen or more trips to The Home Depot, I completed construction of a wooden motor stand, complete with locking wheels, and substantial enough to hold an Allison V-12. 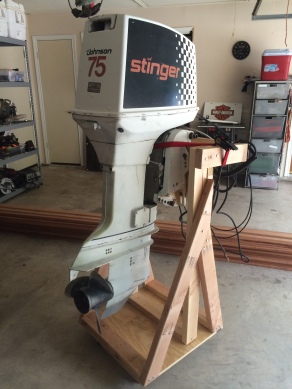 The dry weight for this motor is about 230 pounds, and its shape makes it awkward and difficult to lift.  It took my friends Junior and Kobie from across the street and myself to lift the damn thing, along with Patrice to hold the stand steady while we hoisted the motor onto it.  After much huffing and puffing, we finally got the motor up and onto the stand.  The Stinger is intended to be bolted onto the transom.  Of course, I didn’t have the requisite bolts to properly bolt it to the stand, so we just put a strap on it as a temporary measure.

I built the stand with a little box out section on the front.  This is for mounting the controls and also for facilitating the loading of the motor/stand into the back of my truck for transport.

It’s late Sunday afternoon now, and considering that Patrice and I flipped the 1948 Speed Liner today and my friends and I mounted the motor onto its stand today, I am zonked.  I didn’t mention that I also disassembled the crate that the motor came in and hauled it out to the curb for the trash men to haul off, plus I also hosed down the entire driveway.  Shhhh!!!  That’s highly illegal in North Richland Hills, Texas, but considering that we have had so much rain this year that the lakes are all closed because they have too much water, I’m not very concerned about it.  I almost dare them to challenge me.  Somehow, I feel as if I could probably defend myself in court.

Next week I will drag this motor back out to the driveway, hook the water muffs up, and try to fire it up.  After that, I think I will haul it over to GTR Marine Service for a new impeller and a general servicing.

Have a great week next week!